For the release party of Firefox 2.0 (October 2006), Microsoft (particularly members of the Internet Explorer 7 development team; the higher members at Redmond somehow stopped seeing the funny side of things with Firefox some months before) sent a cake to Mozilla with their congratulations. Mozilla sent the cake back with a note carrying the recipe for the cake that they subsequently released on blogs online for viewing.


-All your user base are belong to us 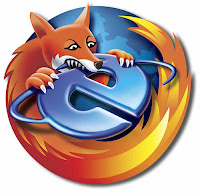