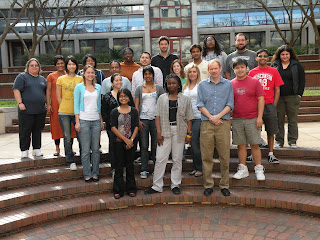 “I am not really looking for a graduate student. I guess I will take one”, said Mavis in a thick British accent at the Biochemistry faculty talks to recruit fresh graduate students to their labs as the fresh meat looked back at her blankly. So, naturally, Dr. Mavis Agbandje-McKenna followed through in her usual style and took THREE sincere and hardworking graduate students who expressed the desire to work with her after an 8-week rotation stint in her lab. And then she took in a fourth one. A raw, playful Indian kid with infinite enthusiasm but limited skills, focus and tact (yours truly). He had done a rotation with her husband Dr. Robert McKenna and the latter offered him a chance to work as a shared student with Mavis, “We like your personality”.

Over the next 5 years, I managed to exhaust Rob and Mavis’ patience as they chipped away at me with hammer and chisel (only occasionally literal) to somehow extract meaningful research effort. They were successful, however, and I went from being a bouncy platypus to a salable research duck (Rob loves collecting them) that almost looked like a swan. I expressed the desire to join one of their best friends’ labs as a post-doctoral fellow and they risked their reputations to recommended me to Dr. Adam Zlotnick, who hired me quickly. I wonder if it may have been my personality again, but it had to be because I had the “Mavis’ graduate student” stamp. Because this is not my story.

Dr. Mavis Agbandje-McKenna was born in her grandmother’s hut in Nigeria. She moved to live with her parents in England at the age of 11 and needed to be tutored to speak in English. Just 10 years later Mavis started a PhD in Dr. Stephen Neidle’s lab at the University of London where she met a tall, long-distance running, introverted mathematics nerd with flaming red hair - Robert McKenna. They managed to get their PhDs, fell in love and got married, all in 3 years and before the age of 25, they were post-doctoral fellows in Dr. Michael Rossmann’s lab at Purdue University. They were younger than most of the graduate students around them, one of them, the aforementioned Adam Zlotnick. But they were talented and hardworking and had very productive post-doctoral stints. Soon enough, they were able to start their own lab at the University of Warwick. Shortly after, the McKenna lab moved to its permanent home at the University of Florida.

Mavis’ lab fit her personality. She was very tough on the outside and very warm inside. She built a strong, diverse, thorough-minded crew that worked crazy hard and played just as hard. Everything that she did had an extra challenge to it - it was whole virus capsid structure determination, not just one protein; it was Adeno-Associated Virus - the gene therapy vector - and not another easy-to-work-on virus (“That virus is a piece of rock” - Adam Zlotnick); it was cryo-electron microscopy with 10Å resolution and messy film data collection, at a time when the resolution revolution had not yet happened. But Mavis was tenacious and never gave up. She charged at the problem again and again with a new approach or a new collaboration each time until the science simply had to yield. This had to be Mavis’ most defining trait and her team loved her for it. It was never a small team; it was heterogenous and diverse in ethnicity and ideas; even running a team had to be a larger-than-normal challenge to fit Mavis’ plate.

And boy did she run it well. Her undergrads were talented and they were rewarded with publications that helped them to successful medical school admissions and research careers. Her graduate students and post-doctoral fellows had to be extremely hardworking to catch up with her expectations. If you were caught napping, you were done. I struggled to somehow keep my naps just under the bar, so my tendency to slack passed off as more of an annoyance. But Mavis did not give up on me. She would never hold back on expressing high expectations or critical feedback. It would be quick, tough and final.

Her expectations, however, were no more than what her own performance matched. She would work on grants like a machine, locked in her office for days. We would drive the 25-hour stretch each way to Ithaca, NY to collect synchrotron data at Cornell (a continuous 48-96 hour shift) regularly. These were the days before we shipped protein crystals in those fancy pucks for remote data collection. Mavis would do a bulk of the driving and data collection herself as we would try to get the most data collected in the allotted time. Between us, we would average a few hours of sleep through those days (I would sleep the most while Mavis’ would barely yawn).

These trips were also the best time to get to know Mavis’ other side and how her thoughts worked. She shocked me when her pronunciation of ‘Jalfreizi’ was more accurate than my own. I only got to know on one of these trips that she overcame great personal tragedy when her father was murdered in Nigeria and she could not travel there to see him. She had profound, yet practical thoughts on feminism, culture and third-world sensibilities. This was significant especially for those of us that came from diverse backgrounds seeking acceptance. Mavis’ thoughts have significantly influenced my own views and values. Despite the pressures of running her lab, a wonderful family and a constant scientific drive, Mavis would find time like this to sustain her inclusive environment.

Mavis’ personality and work ethic have won her many fans outside the lab. She was a stand-out member of the structural virology community and her collaborators always became close friends soon enough. We would have about two conference trips each year (another larger-than-normal Mavis special). We would nervously smile at the professors that we recognized at the conferences even though they would coldly stare straight through us and not reciprocate our unspoken request to connect. Mavis was never one of them. She would always be surrounded by friends but still take time to engage with students that were not her own. She would always join the dance floor, be a voice in the birthday song and share wisdom without restrain. She had big accomplishments and a big team but operated with regular sized sensibilities, a tough act to pull off.

A few months after I left the McKenna lab, I got the call. Mavis had been diagnosed with Amyotrophic Lateral Sclerosis (ALS). It struck me like a free-electron laser. I had lost a very dear uncle to that dreaded disease a decade before and I knew what it meant; what it would do to her. But ALS was not going to have it easy with this one. She fought it for almost a decade, while her scientific empire flourished. She continued to churn out students, structures, publications and even gene-therapy companies. She would still travel to all the meetings, do interviews and stay in touch with her science-children.

Mavis’ larger-than-normal life stands as a stellar example of almost every kind of struggle that one overcomes. Barriers of gender, race, nationality, language, bureaucracy, health or fate could not hold back this mountain of a woman. Her science-children (as she refers to us) take pride in knowing her and calling her our own. As someone who now has a meaningful scientific career with a short mentorship journey of my own, I hope to live up to her standards in my professional and personal life. Late last year, she sent me a text, “Rob and I are SO proud of you” - something I will hold in memory (and in screenshot form) for as long as I live. It is my privilege to have had Mavis guide my journey thus far as her story and principles will take over from here on.

Rest in peace my dear mentor. 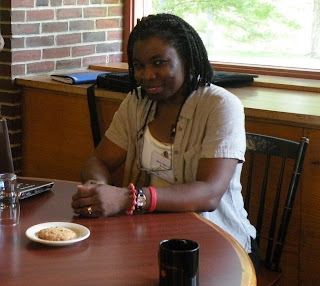 Note: In eulogizing Mavis, I hope not to have minimized Rob’s partnership in Mavis’ achievements and central role in molding me as a graduate student or Adam’s mentorship that I have modeled my own mentorship on. I am grateful to have them all.